If by chance you are like me you enjoy roaming around old buildings, castles, monastic buildings, and church yards, you may have come some odd markings in some of the worked stones, either in situ or on discarded stones from demolished buildings.

For those of you who like researching the unusual etc., you will have found out that these marks are what is known as Masons’ Banker Marks or just Bank Marks.

Research will also show that these marks are believed to have been cut by Stonemasons as a means of identifying their work so that they can get paid.

In Staffordshire, my own County these marks have been found at Croxden Abbey, Lichfield Cathedral, the Hulton Abbey and other old and historic buildings.

My first encounter with them was when I was roaming the grounds of Meaford Hall, near Stone in the 1960’s and came across several blocks of worked sandstone, which I later found came from part of the Hall that had been demolished in the 1940’s. I took photos of them (black and white), did some more research, and then filed them away.   I did find out that Hall was encased in the sandstone from Scotland in the 19th  century, so the Masons’ marks can be dated to that era.

It was several years later when I came across other references to these marks and so my interest was fired up again.  Thankfully with the internet there is now more information about them and more records available.

Mention the word Masons today though and most people will think about the Freemasons, which in truth does have some connection to the Masons is as much as actual Stonemasons were known as Operative Masons and Speculative Masons became Freemasons.

Many Stonemasons were also Freemasons.  Evidence of this can be seen the churchyard of St Peter’s in Stoke on Trent, where there is a very ornate grave stone for one HERBERT STANSFIELD, who died in 1799.  His grave stone shows clear evidence of Freemasonry symbology as you will see from the photograph.

Herbert Stansfield was a Stonemason who came from Halifax, lived at Middlewich in Cheshire, and carried out his craft all over the country.  He may have been working on Stoke Church when he died and there is a record of him being involved in the building of The Red Lion lock, Chalford, in the Stroud area in 1784, see Freemasons Graves in ‘ www.pennyvickers-myworld.com’  for more photos of the gravestone.

But to get back to the Masons Bank marks, there are basically three types of marks used by stonemasons.  The first is the Bankers Mark which was used by stonemasons to identify their work so they could get paid.    It was the job of the Master Mason to check which work had been done by which Stonemason by the mark on the stone.   In 1598 in Scotland there was a regulation issued by James V1’s Master of Works, one William Schew that on their admission to the Stone Masons Guild each Mason had to enter his name and his ‘Mark’.

Yet in 1898 during the refurbishment pf the Priory of St James at Birkenhead, Stonemasons working there were ‘assigned a Mark’.  (see ‘A Guide to the Masonic Symbolism’ by Duncan Moore).  It is obvious that two masons could have the same symbol as their own mark, so assigning a specific mark is more practical.

The second type of mark that can be found on dressed stones are ‘Assembly Marks’ which were used to ensure stones were placed in their correct order and position.   These tend to be Roman numerals; I have come across these on one stone found at Meaford Hall and possibly in the churchyard at Stoke Church – see photos.

The third mark is the ‘Quarry Stone Mark’, which would indicate the Quarry the stone came from.  I have never come across any of these marks to day.

There is another mark you may come across which is found frequently on churches, sometimes on walls and other buildings, these are the ‘Ordnance Survey Benchmark’.  Locations of these marks can sometimes be found on old O.S. maps and were use as surveying aids.  You will also find these marks on Trig Points although lots have disappeared with redevelopment.  See www.ordnancesurvey.co.uk for more information on these marks.

Hopefully, I will be able to add pictures of other marks found, when the current ‘Lockdown’ restrictions (2021) are ended and COVID is under control, and we will be able to travel to places of interest.  Stay safe everyone. 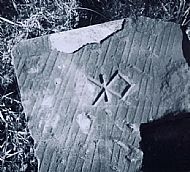 Stonemason's mark Meaford Hall 1
This is the first mark I came across in the grounds of Meaford Hall, Stone back in the 1960's 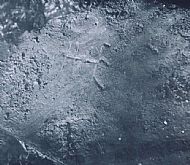 Stonemason's mark Meaford Hall 2
A different mark, not so clear as the first one. 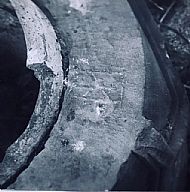 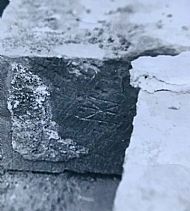 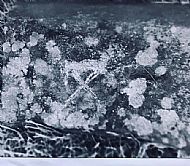 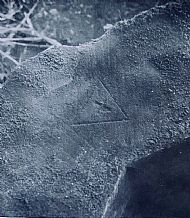 Stonemason's Mark Stoke Church 1
This mark was found on a section of demolished churchyard wall at St Peter's Church in Stoke on Trent. The mark is the same as one found in the Churchyard at The Holy Trinity Church, Hartshill, Stoke on Trent. see next picture

Stonemason's mark Holy Trinity Church Stoke 1
This is the second photo of this mark -right hand stone. see previous picture. The date era for both marks is the 19th century. The mark on the left stone could be an assembly mark, but is a classic Tau mark which maybe Freemasonry related. 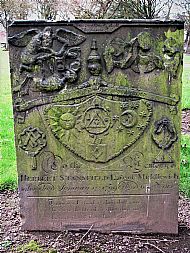 Herbert Stansfield's Gravestone
Here is the very ornate gravestone for Herbert Stansfield in the churchyard at St Peter's in Stone on Trent.
(see www.pennyvickers-myworld.com for more pictures) 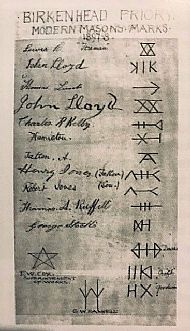 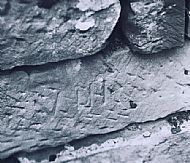 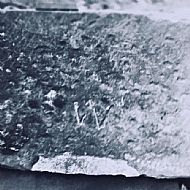 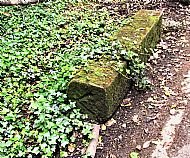 Assembly mark Trentham
This is the second mark found at Trentham

O.S. Benchmark Rudyard
This Ordnance Survey Benchmark was found on a gate post near to the lake side at Rudyard. 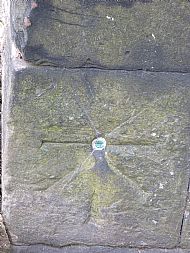 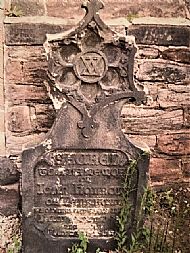 Possible Stonemason's gravestone
I came across this gravestone, which can be found in Sty Thomas's church, Penkhull, Stoke on Trent. The two entwined triangles are a common Stonemasons mark. Further research in progress.
Back to Top